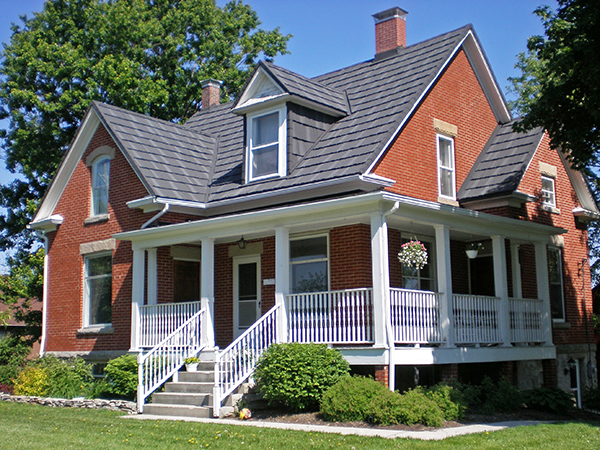 Metal roofs have gotten a bad reputation among some homeowners in Hartford for all the wrong reasons. Science does not back many myths surrounding metal roofing, but many unwitting consumers believe the myths. Metal roofs are safer than their traditionally shingled counterparts for many reasons.

Metal roofs are less prone to inclement Connecticut weather conditions than shingled roofs. Modern metal roof technology has created materials resistant to hail damage. Often, people think of the metal roofs present on their grandparents’ sheds, dented from hail. Today’s products are resistant to normal-sized hail, so unless your home encounters a once in a lifetime storm, there will be no visible damage. Many metal roofing companies offer textured roofs, which make any possible hail damage much less noticeable. When consumers consider wind, rain, and snow damage accrued through the lifespan of a shingled roof, metal roofs always win.

Consumers have been led to believe it’s not possible to walk on a metal roof without causing them damage. The truth is, homeowners can easily walk on metal roofs with instruction from the manufacturer. Walking on metal roofs is sometimes limited to walking on the roof seams or specific roofing slats. Once a contractor has installed the roof, the homeowner will receive instructions on the proper technique for walking on the roof without damaging it.

Metal roofs are installed over multiple layers of solid deck and insulation. Often, people install aluminum roofing over existing shingles, adding even more protection against noise. In past generations, metal roofing was only installed over rafters, creating noisy internal atmospheres during bad weather. Improvements in the field led manufacturing companies to create noise-reducing layers for a better product.

In the short term, metal roofs cost more than shingled counterparts; in the long term, however, they are cheaper. Metal roofs often last three to four times longer than shingle roofs, drastically driving down the overall costs. Most roofs only last 15 to 20 years before needing replacement for missing shingles, mold, or leaks. Metal roofs don’t have the same issues, therefore they last 30 to 40 years. Additionally, metal roofs provide better insulation, lowering the home’s energy costs. Overall, the cost of a metal roof will be lower over the lifetime of your home.

Metal Roofs Are Prone to Rusting

Again, ghosts from the past haunt the metal roof industry. Modern metal roofing is galvanized with coatings and finishes. Multiple layers of protective material cover the actual metal, resulting in rust-proof designs. Roofs won’t rust, mold, mildew, or leak because of the coatings.

Homes With Metal Roofs are Colder

Metal roofs increase the energy insulation in homes. Studies have shown properly insulated attics are 10 to 15 degrees warmer in homes with metal roofs. The materials used in metal roof layering and construction is less porous, resulting in less heat loss.

Metal roofs increase home value, due to their long life and curb appeal. Many roofing companies offer roofs in different colors, designs, and textures. The result is more attractive and luxurious homes. Some studies have shown a high quality metal roof can add close to 70% of its cost to home value.

Making the Decision for Metal Roofing

Metal roofing is a wonderful home improvement project which can increase your home’s value. Before deciding on a traditional or metal roof, be sure to do research on the pros and cons. An overwhelming majority of homeowners have found the benefits of metal roofing far outweigh the drawbacks.